In the Army now 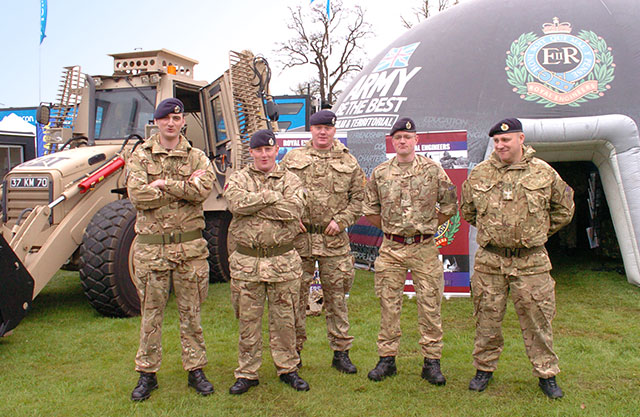 ONE of the most popular stands at ScotPlant this year belonged to 71 Engineer Regiment, who displayed some of the construction equipment used by the armed forces and gave advice on the benefits of plant operators becoming Reservists. 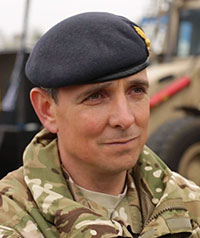 Lieutenant Col. Nick Mifsud is the Commanding Officer of 71 Engineer Regiment (pictured left). He said, “We want to create awareness of our roles, the equipment we have and the opportunities we offer, both for the regular soldier and the reserve soldier.
“One of the reasons my regiment is here is to appeal to employers of plant operators. I’m very keen to take plant operators, get them into the reserve, my regiment can train them as soldiers but then what I have is somebody who is able to take their place in the integrated regular reserve army of the future and add a tremendous amount of value.
“We train our own reserve soldiers. Anyone can join the reserve, we train them as a soldier and give them a trade.
“So we do train reservists as plant operators. But what I need is some real professionals who can come in, mentor those guys and develop them.
“The other benefit we offer is exposing civilian plant operators to a number of equipment, whereas I know on Civvy Street a lot of guys will specialise on one or two pieces.
“We can expose them to a whole fleet of unusual equipment, which I think is great for them as well.”
Lieutenant Col. Mifsud said there was a lot of interest at ScotPlant in employers looking to employ former soldiers.
He added, “We were trying to attract people to us but what I’ve picked up is that there’s a lot of interest from civilian employers wanting ex-servicemen, ex-Royal Engineers, to join them.
“We’ve been thinking on our feet as to how to make this work to our advantage. The clear one is as soldiers do leave the army, we take their welfare very seriously so to be able to give them that lift up into very quick, readily available employment is great for us.
“Employers get someone who is work-ready, someone who understands discipline. Anyone who’s been in the army for years will know how to instruct so you’ve got someone who can train and operate a large fleet and variety of equipment.
“So there’s a win-win situation here.”
Lieutenant Col. Mifsud said there isn’t too much difference between the construction equipment used by the armed forces and that on Civvy Street.
“At the basic level there’s not a lot of difference. There’s nothing that anyone here won’t look at and recognise.
“We’ve got some up-armoured vehicles which have been developed for use in Iraq and Afghanistan. And then we’ve got some bespoke bits of kits – armoured diggers, which have been designed and built for us.
“We’ve got other bits of kit that can throw bridges across gaps and so on.
“But there’s nothing absolutely unique. It’s just the application of the equipment and where we use it.”
One of the advantages of being at ScotPlant was that it provided an opportunity for the public to see and meet soldiers in a different environment from where they’d normally expect to encounter them.
Lieutenant Col. Mifsud said, “Everyone knows about Afghanistan and the huge commitment we’ve had over the last 10-11 years, and Iraq concurrently and slightly before.
“I think it’s so important that a bigger emphasis is placed on the army reserve, which is essentially an army of the community, that people understand what we’re about and how we function.”