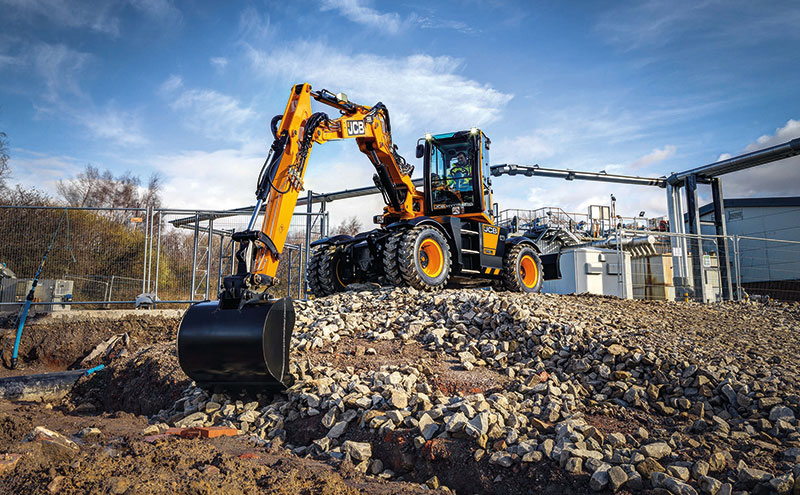 Nick recently gave Project Plant a rundown of the latest developments in JCB’s excavator range and spoke of the importance of bringing new and pioneering products to what has always been a competitive marketplace.

“Our chairman, Lord Bamford, is our chief innovator and drives everyone to innovate,” Nick explained. “We’re constantly looking at different ways to do things.

“A great example of that is the JCB Hydradig, which was the end result of a project that started off by researching how customers’ applications had changed and what their needs were.

“The Hydradig is very innovative. In other wheeled excavators, the engine and drivetrain are above the slew ring. We have given customers something that’s different but allows them to go at 40km an hour.”

Nick believes technology is one of the major factors driving new trends and innovation in the excavator market. JCB has used technology to improve efficiency, increase safety and reduce downtime in their machines.

“If you look at Europe, it’s about productivity and efficiency,” Nick added. “We’ve focused as a business for quite a while on fuel efficiency. JCB engines are very fuel-efficient. If you talk to customers, cost of ownership is important and fuel efficiency has helped drive costs down.

“The excavator market is split in the UK. There’s a big rental market so clearly someone who buys to rent has different needs to a ground worker who buys to operate. But even if you’re buying excavators to rent out, the contractor you’re talking to is probably stipulating that they need to be fuel-efficient.

“The other big thing is health and safety. That’s where the technology comes in: 360-degree camera systems, cameras left and right. You’re seeing more technology coming in, protecting people on the outside of the excavator as well as inside.

Nick agrees the UK excavator market is hugely competitive, but he doesn’t see this as being a new phenomenon.

“There’s easily a dozen manufacturers selling excavators in the UK and Europe,” he said. “There have been a couple more introductions to the market. Some of the Chinese manufacturers are here now that weren’t here five years ago.

“The excavator market has always been competitive. It differs from one part of the country to the next. Scot JCB might tell you their main competitors are this manufacturer or that manufacturer. If you go to Greenshields JCB (dealers in the south east of England), they’ll list their top three competitors but they might be different because our competitors have different distribution networks.”

As a self-confessed “machine person”, Nick said he “absolutely” still gets a thrill when a new product is launched.

“The beauty of that is it has no DPF,” Nick said. “JCB’s strategy at Tier IV and Tier IV Final has been no DPF, no regeneration – whether that’s active or passive. Clearly there’s less componentry in there so it’s more reliable.

“Our most successful dealer in that weight class is Scot JCB. They have a number of customers who are buying 30-40 tonne excavators.

Around 2014-15, Nick said there was a lot of talk within the industry about AdBlue, with many customers expressing fears around issues such as operators accidentally filling the tank with the wrong liquid. In response, JCB launched a machine in the 13-tonne class with no AdBlue requirement – a decision that has proved to be hugely successful.

Nick explained, “Half of the excavator market roughly is in the 13-tonne class. The UK’s a little bit different to the rest of Europe in that probably 60-70% of machines in that category are for the rental market.

“A lot of our customers were expressing to us a fear about AdBlue. Because a lot of these machines are for the rental market, the person purchasing it has no control over the operator.

“Our response was the JS131, which complies with Tier IV Final legislation but doesn’t require AdBlue. There’s no DPF, so there’s no regeneration of any type. When it goes out on rent, all the operator has to do is fill it with diesel. There’s no risk of him putting diesel or any other liquid in the AdBlue. The componentry in the AdBlue dosing units are not tolerant to other liquids.

“We introduced that at the beginning of 2016 and it’s been incredibly successful. In comparison to the JS130, you’re giving up about 26kW – it’s 55kW versus 81kW. But the reality is that on a 13-tonne machine, you don’t need a lot of that power. The priority is uptime for a lot of customers.

“My view at the time when we introduced the JS131 was that it would be very popular in the south, where the rental market is very prevalent, whereas Scotland is still a bit more of an owner-operator market, where you have control over who puts what in the tank. But Scot JCB has probably sold as many 131s as any of the other dealers in the UK.”

JCB followed the same non-AdBlue path last year with the 15-tonne reduced swing JZ141 crawler excavator, which combined similar performance to the JZ140 with the 55kW engine solution used in the JS131.

Nick said, “What we actually did was we used a JS160 hydraulic pump, which has allowed us to lower the rated engine speed. You get the same pump flow, so the cycle times are similar to the 81kW machine but what it’s actually done is reduce the noise as well as the engine speed. You sit in it and it’s a quieter machine, which is good because certainly the zero tailswing machines tend to be used in urban areas where noise is critical. 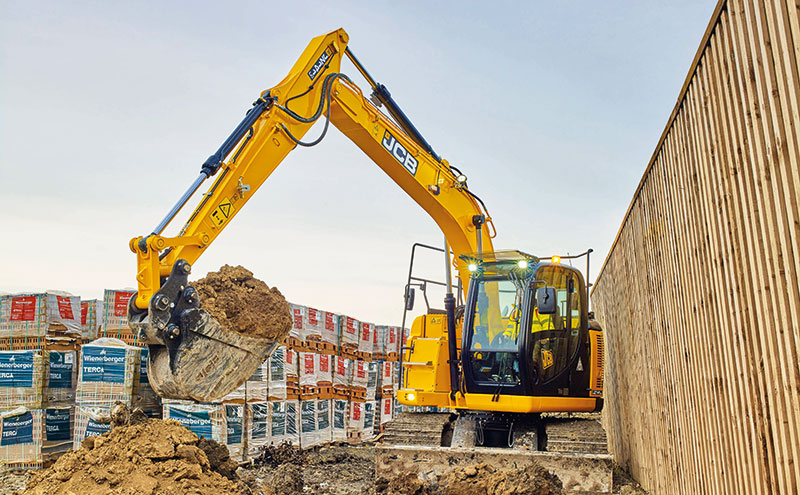 “Feedback has been really positive. If you were in a production operation, there’s probably about a 10% difference between that and the 81kW machine. But these machines don’t operate in that, so generally operators don’t pick up on it.”

Nick believes there’s still a “nervousness” about AdBlue, which might exist until Stage V engines become the norm.

“Is it changing? I don’t know, but there’s still this nervousness about AdBlue,” he said. “I think people are getting used to it. There’s a caution about it. Clearly when we go to Stage V, it will become more prevalent then and people will have to get used to it. If you’re renting machines out and have no control over who’s putting what liquid in, there’s always going to be a fear.

Much of what JCB does is about making life easier for customers. Nick said a major boost was the introduction of the manufacturer’s own engines into excavators in 2011.

“That has been fantastic because JCB as a business over the last decade has been consumed with engine legislation. We’ve gone from Tier III to Tier IV Interim to Tier IV Final and now Stage V is around the corner. Having our own engine in the volume excavators gives us a lot of control. It’s been very, very successful.

“The benefit for the customer and dealer is that if you’re fitting a third party’s engine, in some parts of the world you might be reliant on the local engine distributor to go into the injection system. We’ll have a servicing agreement but with certain parts of that engine you might rely on a specific engine distributor in that territory.

“The beauty for JCB dealers is they can do anything on the JCB engine. They’re not reliant on another business in that territory so when somebody buys a JCB excavator with a JCB engine, and they buy it off, for example, Scot JCB, if there are any issues with that engine, Scot JCB are solely responsible for making sure that machine gets up and running.”

In terms of the global outlook, Nick is very confident of continued growth in all of JCB’s key excavator markets. He expects the business will have its best ever year for excavators in south east Asia while the Indian market remains “very strong”. A market that has seen very large growth for JCB recently has been Russia.

“We’re constantly trying to look for where to grow,” Nick explained. “We have growth plans for all territories. There aren’t any specific territories we’re not in today that we have to be in tomorrow because we have globally a very solid distribution network.

“The UK market has been positive. We’ll see growth again this year. Whether it’s a similar amount, I don’t know, but we’ll see growth in our own sales. We’re certainly planning for that.”

In total, JCB has four manufacturing plants around the world that produce excavators. One is near the firm’s World HQ in Uttoxeter, Rocester while the others are in India, Brazil and China.

“The Uttoxeter factory produces all the excavators for the legislated markets,” Nick said. “The Tier IV Final and Tier IV Interim excavators all come out of that factory.

“We’ve got a plant in Sorocaba, Brazil, which produces excavators as well as backhoe loaders and other machines. That produces Tier III machines for the Brazilian market and also the Latin American market.

“We have a number of facilities in India with the one in Pune producing excavators.

“One engineering director oversees all engineering projects throughout the group and, in my role, I talk very regularly to all the factories. India, Brazil and China will have their own engineering teams but it’s all coordinated here in the UK.

“We use video conferencing facilities all the time and there is a lot of dialogue. If we implement something on one machine for a non-legislated market, we look to see if it could be used in the legislated market and vice versa.

“The JCB factories all look similar from the outside generally. The production philosophies are the same.”

As for what might be next on the agenda for JCB’s excavators, Nick remained tight-lipped, revealing only that the business is constantly working on its product plan and “some exciting stuff” is in the pipeline.

In other words, watch this space!