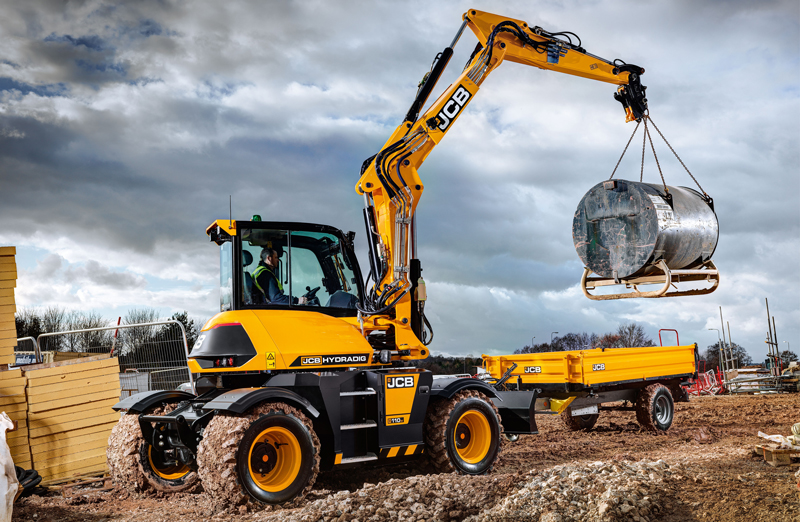 A series of brand new JCB models will make their first appearances in Scotland at ScotPlant 2016.

As part of an extensive line-up of 25 machines on its stand, Scot JCB will display the brand new JCB Hydradig, the JS131 and JZ140 tracked excavators.

JCB Hydradig is a totally new tool-carrying solution, bringing “new levels of innovation and engineering excellence” to the growing compact wheeled excavator sector of the market.

The JS131 is crawler excavator for rental customers. It builds on the success of JCB’s popular JS130, but is powered by a rental-specific 55kW (74hp) version of JCB’s proven Ecomax diesel engine. This power unit meets Tier 4 Final emissions standards without a diesel particulate filter (DPF) or any requirement for Selective Catalytic Reduction (SCR) and a diesel exhaust fluid.

The 3CX Compact – designed to deliver big machine performance for confined job sites – takes the compact backhoe loader concept to a new level, to meet the demands of the construction sites of tomorrow. Just 1.9m wide, 2.74m high and with a top speed of 40km/h – the 3CX Compact is said to be perfect for road resurfacing and repair contractors, utilities, groundworkers and municipalities working in the confines of congested urban construction projects.

The ‘Platinum Edition’ 3CX backhoe loader is a colourful limited edition machine manufactured to mark JCB’s 70th anniversary. A total of 70 models – one for every year that JCB has been in business – will be produced in striking livery last seen on the 3CIII model in 1979.

Each comes complete with red bucket, full white cab and red wheels instead of the customary black and yellow finish and is fitted with air-conditioned cab, heated seat and a six-speed Autoshift transmission. In a nod to the demands of the modern operator, the colourful machines will also be equipped with in-cab coffee makers.

The JCB 457 wheeled loading shovel meets Euro Stage IV (Tier 4 Final) emissions standards, with the adoption of a powerful MTU diesel engine that is described as being perfectly matched to the machine’s operating duties. JCB said the engine contributes to a fuel saving of around 16% compared to the previous model. As with other JCB machines, the engine in the 457 meets latest emissions legislation without the need for a diesel particulate filter (DPF), relying on an efficient combustion process, with a selective catalytic reduction (SCR) system and an exhaust fluid additive.

Scot JCB has supplied and serviced JCB machinery for over 50 years, growing into a highly specialised machinery distribution company operating through a network of twelve branches from Muir of Ord north of Inverness, to Carnforth in Lancashire.

King of the Hill: new Tefra tilt hitch on show

Engcon to celebrate ‘versatility’ of products