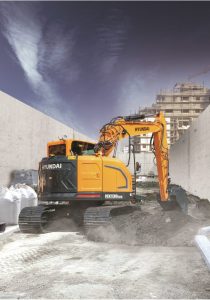 VISITORS to ScotPlant 2018 will be among the first in Europe to catch sight of the new Hyundai HX130 LCR crawler excavator.

Taking pride of place on the Young Plant stand, the show will mark the official European debut of the 13-ton machine. The excavator is the third compact-radius excavator model in Hyundai’s HX series product line and is also available in a second standard configuration, the HX130 LCRD, which includes a dozer blade.

The machine is powered by a 73.6hp (55 kW) Perkins 854F Tier 4 final compliant diesel engine. A statement from Hyundai Construction Equipment said, “When it comes to performance and productivity, the engine and hydraulic system of the HX130 LCR are unbeatable. Its Diesel Particulate Filter (DPF) equipped engine delivers optimum power and fuel efficiency, without the need for SCR. So, users do not have the hassle with AdBlue.”

Other highlights on the Young stand will include the Scottish debut of the Kobelco SK210HLC-10 Hybrid excavator and a range of products from brands such as Kubota, Thwaites, Bomag, Dieci, CompAir and Probst.

“We’re very much looking forward to welcoming customers old and new on the stand,” Brian said. “As part of the celebration of our 40th year supplying the Scotish construction industry, we’re going to have a very interesting barbecue, which we want to be a surprise. It should be spectacular; all I can say is that it’s industry-related…

“We’re going to have the very first Kubota mini-digger model sold in the UK, which is the KH10, first introduced to the UK in 1979 as the only model in the range. We’re going to have a restored version of that. I got involved in selling a few of those back in 1979 so we’re excited about that; it’s going back to the beginning for me.

“Sticking with the old and new theme, we’re going to have the brand new Kubota KX030-4, a 2.8t machine which will have its Scottish launch.

“The new Kobelco SK210HLC-10 Hybrid will also be there. This machine features a Lithium ion battery system and an electric slew motor/generator. The engine is the same size as a conventional diesel engine for a 21-tonne excavator but obviously you have the electric power boost too. We reckon there will be about a 25% saving on fuel costs.”

Young Plant has enjoyed huge success at previous ScotPlant events, with Brian describing the show as the “ideal launching pad” for new machines and innovations.

“For things like the Hybrid excavator, ScotPlant is an opportunity to introduce a new concept to the industry as well as making our customers and potential customers much more aware of what we actually have in our full range of products,” he added. “We don’t get many shop windows to let people see them in the flesh.

“ScotPlant has always been an excellent show for us; our most productive show. We make sales on the day and hope to continue to do that and increase on that.”