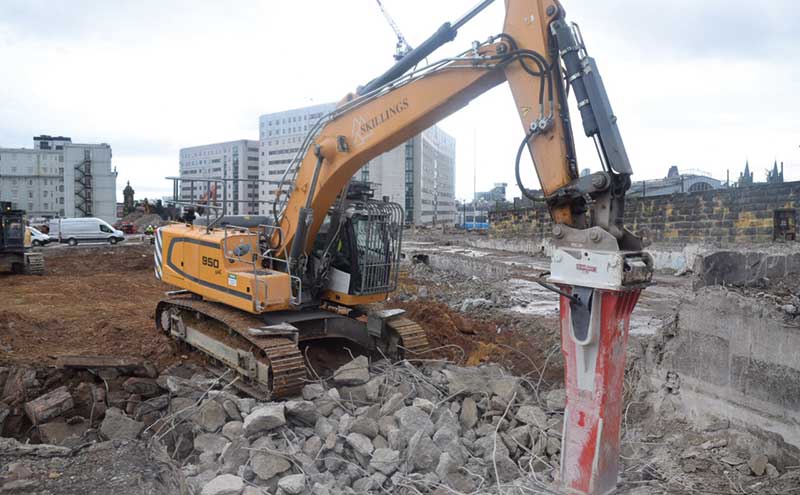 OVER the last 20 years sub-contract demolition works firm, the Skillings Crushing Company, has been involved in a range of high profile and challenging projects.

Founded by Dave Skillings, the company has achieved a reputation for being one of the ‘go-to’ sub-contractors in the UK in the demolition, earthworks and crushing sectors.

For a number of years, Dave was the main sub-contractor for Controlled Demolition Limited doing all their remote demolition works across the UK. However, his work now encompasses the ever-growing remediation side of the industry as well as the normal bread and butter demolition.  The company has a wide range of diggers and attachments, combined with crushers and screeners, to suit a variety of jobs.

There has however been one constant theme in Dave’s business and that has been the utilisation of the Rammer brand of hydraulic breakers.

“Over the years I have used Rammer G80s, G90s G100s but to name a few and they have always given me great service,” Dave said. “I’m actually still working away with a 10-year-old Rammer G110 and I wont let it go. She has broken more concrete than I could ever care to remember! They hit hard and give me the production that my clients and I demand.”

11 years ago, some of the jobs that were being presented to Dave required a hammer that could do work on another level altogether. Demolition projects such as BAE Systems buildings that were built to test and explode bombs within their confines and earthquake-proof buildings for British Nuclear Fuels. At this stage, Skillings took the big step and invested in the 7000kg Rammer G130 breaker.  Once again, breaking was achieved in projects that otherwise would have posed serious issues on timing and economy. One major job fully completed with the Rammer G130 was the old Tate and Lyle Refinery in Greenwich where reinforced concrete was extracted in time and on budget.

As the work load this year has continued to expand, so has Skillings investment in plant and attachments. Needing a hammer equivalent in production to his old faithful G110 Dave opted to try out on demonstration the new Rammer BR5011. This was quickly added to the fleet with production levels exceeding the G110 by 50%.

“I was told that the BR5011 would far exceed the performance of my G110 but it was there to be proven. After running the breaker for a few days the jump in production was huge and we added the BR5011 to the fleet,” Dave said.

The first job for the BR5011 was sub-contracting on the old Post Office sorting centre in central Liverpool. This was breaking heavy duty mass poured concrete cores that were set on 6 metres of rock. Here the 5011 went to work beside the G130 to complete the job. Since this has been completed, Skillings have taken delivery of a new 7000kg BR7013, which is the G130 replacement model.

With his ever-growing fleet of Rammer breakers, Dave has been supported by Murray Plant, the exclusive UK Importer of Rammer demolition attachments. The hire firm has 40 years experience in the breaking business and understands not only the attachments but also the industry in which they are working and the demands it expects.

Fergal O’Neill of Murray Plant commented, “Myself and Bruce Murray have been delighted to secure the on-going business with a customer such as Dave Skillings. Dave has fantastic reputation throughout the industry as a man who really knows his business and has exacting demands on his equipment and attachments. It is a genuine pleasure doing business with him.”