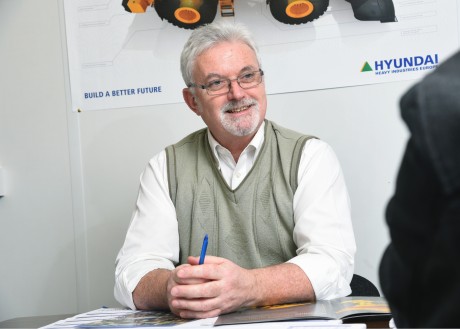 YOUNG Plant Sales will be back in their usual spot at ScotPlant with a host of new machines and a spring in their step after an “excellent” start to 2016.

The Stirling-based firm has secured a host of significant orders in the early months of the year and reclaimed the dealership for Thwaites dumpers.

Managing director Brian Young has exhibited at every single ScotPlant, though this year’s event will be an emotional one as it is the first show his mother Bridie, who passed away shortly before Christmas, has missed. “It will be very strange with her not being there,” Brian said. “I’ve got so many great memories from previous ScotPlants, including our 30th anniversary celebrations when we had a roast pig and champagne on our stand each day. My mother was very much part of those celebrations.

“These trade shows are very important. We have a very limited shop window to let customers see our products. We’re always there to do business but sometimes it’s just a starting point in that we’ll meet new and existing customers, talk about their potential purchases for the year ahead and lay down a platform to commence negotiations. The actual buying process can sometimes be quite long and drawn out.

“We’ve been in the same spot since the show started, pretty much in the centre of the showground. To entice new customers onto the stand, something needs to stand out. Customers tend to be very loyal to brands but if we can demonstrate that we have a new solution to a current problem, they’ll want to know more about it. We have to sell our difference. If your stand looks the same as everyone else’s, where’s the incentive for people to come on?”

Young Plant will have a selection of models from the new HX range of Hyundai excavators on their stand, alongside innovative new machines from Kubota, Bomag, Probst, CompAir and Hydrema. Brian is particularly excited about having a wide range of Thwaites dumpers back on the stand for the first time in a decade.

“It was a huge coup to get the dealership back,” he added.  “We’ve missed it. We bought NBT (North British Tractors) in 2003 particularly to get the Thwaites,  Bomag and CompAir dealerships. We were very disappointed when we lost it and absolutely delighted to get it back again.

“We’ve had an excellent start to the year with some big orders. One demolition firm just ordered a couple of 44-tonners and a 50-tonne excavator. We also concluded a deal with Scottish Water for 40 Kubota mini-excavators. We’d been working on that order for three-and-a-half years.

“We’re planning on 10-15% growth for the year ahead. We had a five-year plan for continuous growth of 10-15% per annum. This is the final year of that plan and we’ve achieved all our targets so far. We believe we’re on track to hit our targets again this year and we’ve certainly started with success in the first quarter. Once that ends, we’ll start a new five-year plan, hopefully on a similar vein.”

Brian has just been added to the executive committee of the Scottish Plant Owners Association (SPOA) and he believes this institution plays a vital role in managing positive changes to the industry.

“I’ve just attended my first meeting, it was good – I enjoyed it,” he enthused. “I went to the AGM earlier this year and somebody asked me why I wasn’t on the committee. I said ‘because you haven’t asked me!’

“This association is very important for our industry. We have great concerns in the industry over recruitment, training, etc, and luckily for our industry the SPOA takes these matters very seriously and is seeking partnerships to address them. The SPOA is sourcing government funding to provide training funds for apprentices and new people coming into the industry. They’ve had success over the past 12-18 months in finding money to provide training for operators who’d left the industry to come back into it, which can be an easier route in some ways when trying to recruit new site operatives and a skilled labour force.

“The skills shortage issue is not currently worrying us too much at Young Plant because we have a fairly full and varied skilled workforce so we’re not actively recruiting, but we have found it very difficult in the past, particularly getting skilled engineers. Everybody’s looking for the same people. In times of recession, people stop training youngsters. And when you’re understaffed, you can’t afford to have your skilled people spending too much time training new recruits. You need them out there working on the product.

“We didn’t cut back on apprentices during the recession. Doing that can be short-sighted. It is difficult but, having been in business 37 years, we’ve seen a few recessions come and go and appreciate the skills gap created every time we come out of one.”

Brian laments the fact that, especially over the past two decades with the rise of the Internet, more and more youngsters are pursuing different career paths than they would have done in days gone by. “White collar” industries like web design have replaced construction as the career of choice for many. He believes the education sector could be doing much more to promote construction and has already volunteered to go into local schools to talk to pupils about the opportunities available.

“I would like to see better promotion of the construction industry at school level, because I don’t think the careers teachers make the youngsters aware of the opportunities involved,” he said. “The perception is poor but I think the level of skill required now to work on sophisticated machinery, with up-to- date electronics, telematics and very sensitive hydraulic systems, requires a new breed of engineer who must be computer literate as well as having a good knowledge of mechanics.”

Volvo back with an "unbeatable combination"