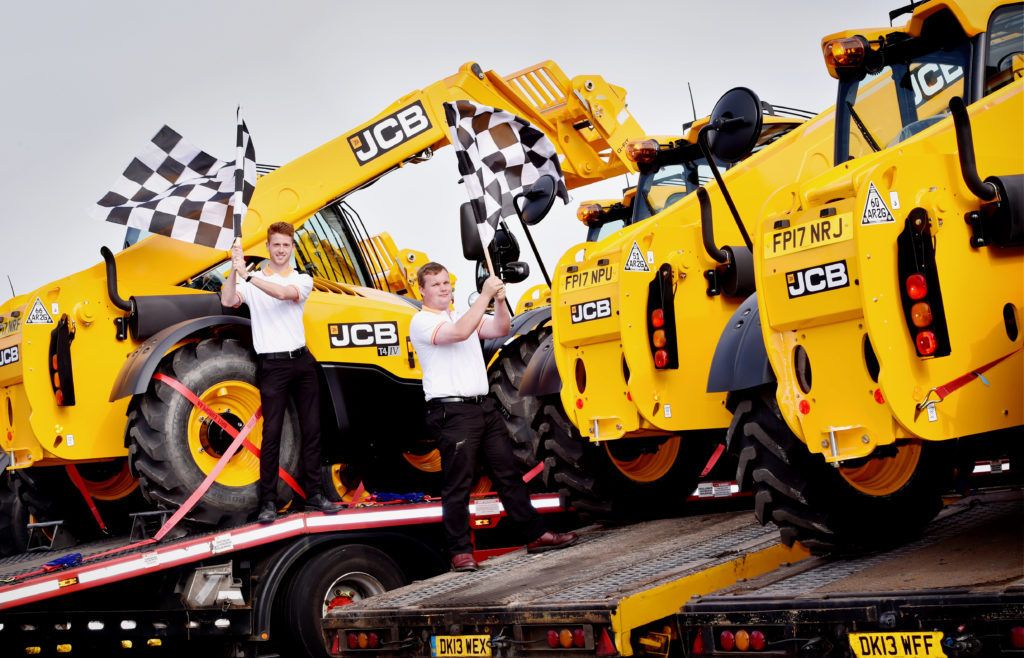 Loadall development engineer George Cooper and Sam Goodman, who works in product sales, waving off the machines with chequered flags

A FLEET of JCB Loadalls are poised to play a starring role at this year’s British Grand Prix.

Fourteen 531-70 telehandlers will provide four days of support at Silverstone. They were sent on their way from JCB’s Rocester HQ with a convoy of trucks led by a JCB 3CX compact backhoe loader wrapped in the colours of Williams Martini Racing, to mark the manufacturer’s partnership with the Formula 1 team.

Loadall development engineer George Cooper (25) has been heavy involved in the development of a special jib attachment for the models, which JCB said will make it easy to quickly recover crashed cars during various race events. He has spent six months working on the re-configured 531-70 and the attachment.

George will be one of five JCB employees on hand to drive the Loadalls at the circuit, working alongside nine telehandler operators employed by Silverstone. He said, “We have been working with the motorsport governing body FIA to develop the special Loadall over the last six months. It will make its debut at Silverstone and we will be there to operate them and continually assess their performance.

“The main benefit of the new jib attachment is it moves the lifting point of the car away from the actual machine, so it makes it easier and safer to recover a vehicle from the track. The 14 machines will be strategically located around the circuit on bends and at points where the likelihood of a car spinning off is higher.

“We are in for four long days as we will be on duty from 7am to 6pm, Thursday to Sunday, but it will be great to see the machines doing their job and helping to keep the races flowing smoothly.”

JCB has also supplied six further machines to the race circuit including a 8026 mini excavator, VMT260-120 roller,  site dumper and a backhoe loader.