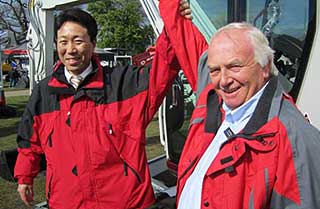 JMS Equipment of Aberdeenshire was named UK Dealer of the Year by Takeuchi… again.
The Turriff-based business repeated its success of 2009 to make it a hat-trick of Takeuchi titles; in 2007 it was voted New Dealer of the Year. To land the award JMS had to meet strict criteria on sales, parts, service, technical support, administration and accounts.
The company was set up by Jim Mulligan in 2005 after he sold his plant haulage business and has been responsible for introducing the brand into the north-east.
Takeuchi’s stand at ScotPlant was supported by representatives from its six-strong dealer network in Scotland which sells an average of around 150 machines a year. In 2004 the Japanese manufacturer sold just 20.
Three excavators were sold ‘off the stand’ on the first day.
Tags #Jim Mulligan #JMS Equipment #ScotPlant 2012 #Takeuchi
ScotPlant 2012