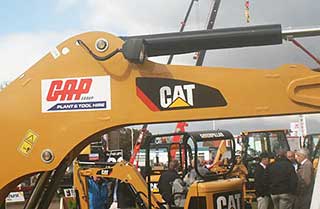 Show inquiries have been quickly converted into sales by the team at Caterpillar dealer Finning UK.
“We took 48 good enquiries from good quality potential and existing customers with nine confirmed orders last week worth £412,000 to us,” reported key account manager Alistair Murdoch. “We even sold to three brand-new customers to Finning. Here’s hoping for the next 39 to come this week!”


He said visitors were encouraged by Finning’s expansion in Scotland, including a new branch in Dumfries, and showed particular interest in the new range of machines and features such as the Stage Tier 111B technology. And the futuristic style of the new excavators also drew the crowds. “If nothing else, CAT gets people talking!”
The driver operator challenge was won by Keith Hay of David Miller Contractors who left the show with the prize of a pair of CAT boots.
Tags #Alistair Murdoch #David Miller Contractors #Finning UK #GAP Group #ScotPlant 2012
ScotPlant 2012